Probate delays continue to cause havoc for bereaved families

Delays in grants of probate have been in the news, with what should be a straightforward but necessary part of dealing with someone's estate being made much harder.

Grants of probate are provided when applicants are given the legal right to deal with someone's property, money and possessions after they die. Despite government targets to complete the process in eight weeks, many applications are taking considerably longer. Understandably, this is causing problems to many bereaved families who need support, not more stress, at this most difficult of times.

In January 2022, the Ministry of Justice announced a single, flat-rate fee of £273 for all users of the probate services. For non-professional users, this constituted an almost 80 per cent increase. However, instead of a better service to match this heightened cost, waiting times have become longer. 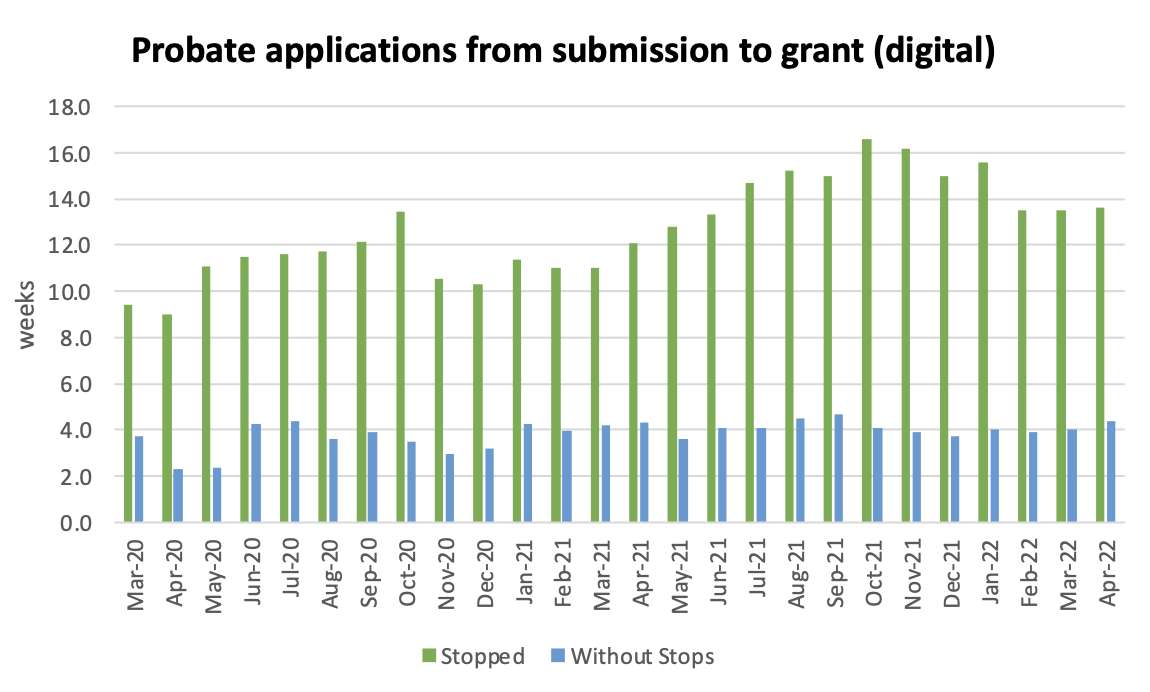 As seen in the chart, digital applications in April 2022 took more than 13 weeks from submission to grant when stopped for more information to be requested and 4.4 weeks without stops. This is an increase of more than a month on the April 2020 figures. For paper applications, from submission to grant takes around 22 weeks when stopped and 8.9 weeks without stops, an increase on 2020 of almost 75 per cent. It is also worth noting that in 2019 in the MoJ had a target of ten working days to process applications, which it missed in 90 per cent of cases. That target has since been dropped.

Stopped applications are now taking more than five months to process. HM Courts & Tribunals Service (HMCTS) states that applications can be stopped for a number of reasons, including the condition of the will, documents being missing or an executor not being accounted for. Though HMCTS has stated it is fully committed to directing its resources to combat the backlog of stopped applications, this has come at the cost of further delays for new applications. According to the Law Society, HMCTS says it aimed to return to pre-Covid levels by December 2021, however this was unsuccessful due to a 'higher than forecast' intake at the end of the year.

A recent article in The Times has drawn further attention to these delays by recounting the story of Barbara Lewis, who passed away in November last year. Her daughter, Yvonne Davies, applied for a grant of probate and expected to receive the grant eight weeks later. However, six months later and despite repeated attempts to contact the MoJ, Yvonne had still not received her grant apparently due to delays scanning her mothers' documents.

Alongside this, just months before the Covid-19 pandemic further exacerbated delays, HMCTS introduced a new probate case data management system. Anecdotal evidence has so far suggested that this new online process is only fit to deal with the most simple cases, with anything more complex unable to process through the system, in turn resulting in more stopped cases and an increasing number of grant delays. It all provides further evidence that such delays cannot be solely blamed on the increase in applications due to Covid-19.

According to HMCTS, the current focus is on 'reducing the timeliness of probate applications, driving new application volumes down and ensuring the growth of specialist intestacy knowledge across a broader group of staff'. However, as seen in the increases in waiting times, as well as prices, this is very much not the case.

With no sign that the rise in costs, the expansion of HMCTS to centralise administration or the new online service have led to an improved services, the government must act. Families applying for probate should be offered reimbursement for delays experienced. Grieving families deserve better.